The square root of minus one is an imaginary number, but it can't be imagined by the human mind. Yet it exists and has great power!

PANDORA'S BLUFF and THE IRRESPONSIBILIAD

I recently decided that the title for the 1000 story cycle I have been working on for the past twenty years shall be Pandora's Bluff. For many years I referred to this project simply as my 'Grand Scheme' or 'Big Wheel' or even as my 'Punicycle'. But the new name is better. I like its allusion to Classical mythology, to Pandora's fabled box of troubles and the tiny but indomitable figure of 'Hope' at the very bottom. But in my scheme it is reversed -- lots of little 'hopes' and one Big Trouble. So it's a pleasing title, cynical without being bitter, and it should help me feel that all the stories I have ever written really are part of just one work, however bloated or asymmetric it might eventually turn out to  be.

I have also decided on an overarching title for the series of historical novels I plan to begin writing when I turn 50, if I live that long, of course! The title is The Irresponsibiliad. I say a 'series of historical novels' but in fact the idea is to write just one vast novel -- the longest novel ever written! I first conceived the notion of doing this when I was 16. I envisaged a family saga starting in the year 5000 BC and following a single line of descent through 270 generations to the present day. Really it's just a mighty excuse to explore every global civilisation that has ever fascinated me: the representative of each generation will travel geographically as well as through time, just like our real ancestors did, taking part in some of the key moments of history.

Naturally, without having the grounding of the same characters throughout the entire work there needs to be something else to act as a structural glue, to ensure that The Irresponsibiliad truly can be defined as a proper novel rather than a sequence of separate incidents. I believe I have found the perfect backbone for the immense arc of this project: genetic laziness. Each new descendant will attempt to live a life of minimal toil within their particular milieu, with varying degrees of success from none at all to plenty. This single chronic quirk should lead the cast of the book into almost constant conflict with society and authority: into revolution, evolution and maybe even transcendence.

That all remains to be seen... The project is almost certainly beyond my abilities anyway. The amount of research necessary even for its commencement is prodigious. So far I know only that the first volume will be called The Sky Saw and will be set in Ancient Sumer. I have long been intrigued by the Sumerians, the inventors of writing, the wheel, beer and boardgames; and the benefactors to mankind of the oldest surviving book of fiction, The Epic of Gilgamesh. I am something of a devoted Sumerophile in fact!

I don't know if The Irresponsibiliad will be contained within Pandora's Bluff or not; I always assumed it would, but now I'm not so sure. I can imagine writing 1000 linked stories but I can't imagine finishing the longest novel ever written. No matter: it is always better to be grandiose than modest in one's schemes!


Some blather about my individual story-cycles (I call them my "wheels" so I guess this makes me a spokesman!)

As all my work is interconnected, it comes as no surprise that within my grand wheel of 1000 stories there are many individual story-cycles or little wheels, rather like cogs in a clock or some other mechanical device, probably a story machine... Some of these wheels are relatively large, others are quite small; some are finished, others are missing teeth. The ultimate idea is get them all enmeshed together, but some are still isolated from the central workings. Here is a list of many of the most important ones to date:

(the above two are arguably the most crucial wheels in the machine so far, closely followed by:)


One day I ought to draw some sort of schematic linking all these sets together but that will be a big task and might require a lot of effort, so don't expect such a schematic soon...

My ambition is to become an official member of OuLiPo

OuLiPo is a system of writing that encourages the use of mathematical constraints to help create work that is startling, clever and very original. It was founded in 1960 by Raymond Queneau and François Le Lionnais. Although the idea of using mathematics to create literature might sound very formal and somewhat daunting, the reality is that OuLiPo techniques strongly emphasise playfulness and whimsy.

My favourite writer, Italo Calvino, was a member of OuLiPo.

Too many to mention really...


Music...
I am a fan of what is unsatisfactorily referred to as 'World Music'. I especially like music from Brazil and India. I also like jazz, ambient, classical and some avant-garde rock. I am a big fan of the 'Canterbury Scene', the more whimsical and offbeat cousin of prog-rock. One day I intend to write a non-fiction history of this neglected movement.


Religion...
Half Buddhist, half Taoist, half atheist -- and living in constant hope that those fractions never add up.


Interviews...
There are many interviews with me on the internet, and some of them are rather inaccurate, but this one is a fairly good example.

Vegetarianism...
I have been a vegetarian since the age of 14, partly for religious reasons (yes, that's when I became a Buddhist) but also for the sake of my body. I object to the eating of meat on moral grounds, health grounds and as a simple question of good taste!

I have set up my own small press. This is something I have been planning to do for a long time.
It has a name: Gloomy Seahorse Press.
And it has a mandate: to publish my own works (of course) but also a few writers who have gone out of print, or foreign writers who haven't yet been adequately translated into English.
I have the rights to issue the first ever low cost edition of the 1950 cult classic The Exploits of Engelbrechtby Maurice Richardson.
I am interested in publishing such writers as W.E. Bowman, Shinichi Hoshi and Jacques Sternberg.
Here is the logo, painted for me by Adele Whittle: 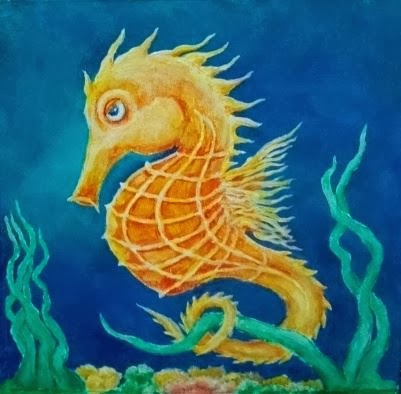 So far it has published three books by Yours Truly, including:
* More Than a Feline (an illustration collection of cat-themed stories and poems)
* The Gloomy Seahorse (my one and only poetry collection)
* Flash in the Pantheon (a collection of 123 flash fictions)
All these books are (or will be) available on Amazon and elsewhere, but in the meantime they can be purchased from here.
I will soon be reissuing my book from 2002 Journeys Beyond Advice, among others.